Revenue almost doubled in FY 2022, and Land Commissioner Stephanie Garcia Richard attributed that to a renewed diversity of uses for State Trust land, in addition to the booming oil and gas industry.

Money generated by the Land Office is used to fund public schools, hospitals and other public services in New Mexico.

“This record revenue has a chance to be a real game-changer for our schools, hospitals, colleges and other important institutions,” Garcia Richard said.

Eleven leases of State Trust land were granted to Pattern Energy earlier this year to build a wind farm on about 148,000 acres in Torrance, Lincoln and San Miguel counties.

That was expected to generate up to $196 million in revenue for the State during the facility’s lifetime, producing 500 megawatts of wind power.

The State also signed recently four leases with the City of Las Cruces to power its water wells with solar energy produced on State Trust Land.

In total between January 2019 and September, the Land Office said it increased renewable energy revenue by 1,400 percent and active leases by 208 percent.

More:What’s a ‘reserve margin?’ How can it protect southeast New Mexico from state’s power woes?

Growth in New Mexico’s renewable energy followed a global trend of investments in utility-scale wind and solar energy, according to an Oct. 11 report from international energy analytics firm Rystad Energy.

Worldwide investments in the renewable sector were expected to reach $494 billion in 2022, read the report, climbing higher than oil and gas production at $446 billion – the first time in history renewable energy investments overtook fossil fuels.

This increase in production could also lead to shorter timeframes for returns on those investments, with Rystad estimating current market conditions in Europe shortening paybacks to 12 months or less.

“Capital investments in renewables are set to outstrip oil and gas for the first time this year as countries scramble to source secure and affordable energy,” said Michael Sarich, Rystad senior vice president. “Investments into renewables are likely to increase further moving forward as renewable project payback times shorten to less than a year in some cases.” 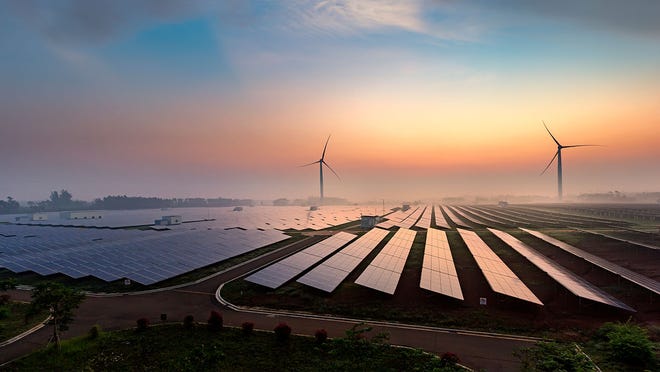 Oil and gas still leads in revenue for New Mexico

Lease sales alone held monthly in FY 2022 brought in about $20.7 million in sale bonuses to the Land Office, records show, and total royalties in the last 12 months was reported at about $2.36 billion, more than quadrupling since FY 2013’s total of about $548.3 million.

Most of the lands leased for oil and gas were in the southeast Permian Basin region New Mexico shares with West Texas, which the Energy Information Administration (EIA) reported averaged about 5 million barrels per day (bpd) of the total U.S. output of about 11 million bpd in 2022.

Oil made up 75 percent of the Office’s fossil fuel revenue in 2021, records show, with natural gas at 25 percent.

Natural gas revenue grew in the last two fiscal years, reported at 10 percent of revenue in FY 2019 and 13 percent in FY 2020, according to a report from the Land Office.

Increased production followed restored fuel demand as the U.S. recovered from the COVID-19 pandemic and business and travel restrictions were lifted.

Statewide, oil and gas were projected to generated about $3 billion in revenue for New Mexico this year, making up almost a third of the state’s budget.

But Garcia Richard said her office prioritized growing uses besides oil and gas, hoping to prevent drastic declines in state income should the market for fossil fuels bust in the coming years.

The newly created Office of Outdoor Recreation within the State Land Office was also a growth area contributing to its revenue, with the Land Office reporting a 425 percent increase in permits processed since 2019.

“We all know that oil is a finite resource, and we can’t rely on it forever, so I’m doing everything I can to build a solid foundation so our schools and intuitions can thrive long into the future,” Garcia Richard said.