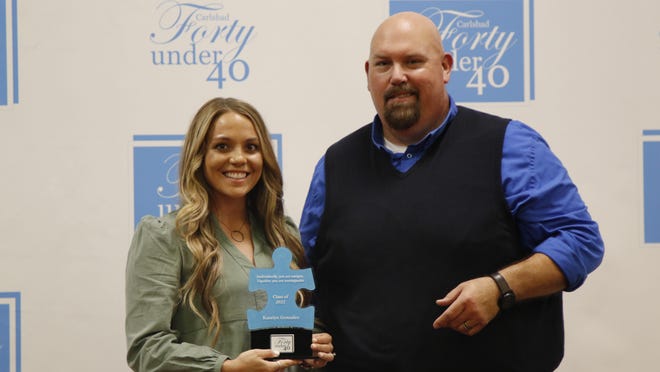 Andrew Doty first felt out of place when he moved to Carlsbad five years ago, but the West Texan said he feels at home in the family-friendly community.

Doty, the director of information systems at Carlsbad Medical Center and Region 2 director for Community Health Systems (CHS), relocated to Eddy County after his young daughter moved to the community.

“When I moved here, I didn’t know anybody,” he said. “I wanted to be around for the young years (of his daughter’s growth). I was kind of nervous and kind of scared. The community was accepting. They took me in and took care of me.

“I was not used to that where I grew up. Nobody talks to anybody. It wasn’t friendly like this. It just kind of flipped this switch inside of me and I kind of felt like I wanted to do the same thing they were doing,” he said.

Doty was born in Graham, Texas and grew up in the Midland-Odessa area of west Texas.

“Carlsbad is awesome. It’s a super tight community. Some people tell me sometimes ‘it’s so much different. It’s getting away from the way it used to be.’ It’s hard for me to imagine that. To me the community is awesome,” he said.

Doty, like any parent, tries to balance work and family so he can spend time with his daughter who is now 10-years-old.

He described his job at Carlsbad Medical Center as the mediator between information technology (IT) and the hospital.

“I manage the day-to-day. I have some regional duties and corporate duties and some compliance and auditing duties. I just try to keep everything running,” Doty said.

He said information systems at Carlsbad Medical Center were behind the scenes and not out front for public consumption.

“I’m not on the frontlines at all. I attend a lot of administration meetings for projects, and I give advice for what IT solutions can accomplish their goals,” Doty said.

Meet the 2022 40 under 40 class: These 40 leaders are changing the Carlsbad community for the better

His job was not limited to Carlsbad as he tends to infrastructure needs for 15 other CHS properties across the United States. Founded in 1985 CHS has 81 hospitals in 16 states, including three in New Mexico, according to the company’s website.

From medical data to voice communications. He said IT played a prominent role in hospital functions.

“Anytime anybody in the community uses the hospital for labs and reports. I maintain that those outside providers find that and get that,” he said.

Since Carlsbad is considered a rural area, Doty said the need for outside specialists was critical and telemedicine or use of telecommunications technology for remote diagnosis and remote treatment of patients filled a void.

“Which means we do your radiology exam, and that image is going offsite to someone in Tennessee or Florida, and they do that reading and send those reports back and his to be in a timely manner,” he said.

Doty said IT monitors communication and data links every hour of the day and night ensuring medical patients are treated with a proper diagnosis.

“I really like healthcare because it’s always different. This is one of the things I really love about it with some off the wall emergency or there’s going to be something new for me to learn,” he said.

“I’ve been doing this for a long time and at least on a weekly basis I’ll run into something that I haven’t seen before. I get to pick it apart and figure it out. Really any day could be different,” Doty said.