Hundreds of thousands of acres burned in New Mexico last spring as its two biggest wildfires ever were allegedly lit purposefully, but got out of control.

This year, New Mexico Sen. Ron Griggs (R-34) of Alamogordo hoped to curb threats of devastating blazes during what he said was peak fire season by introducing a bill to ban prescribed burns – purposefully set as a means of forest management – between March and May of each year.

That fire was attributed to a prescribed burn set by the National Forest Service that was stoked by heavy winds, amid seasonally parched conditions following New Mexico’s typically dry winter.

That was followed by the Black Fire in southwest New Mexico which started on May 13, burning 325,156 acres, records show, in Catron, Grant and Sierra counties in Gila National Forest, with the latest reports citing it as “human caused” although the precise cause of the fire remained under investigation.

While no deaths were reported in either of those fires, the McBride Fire turned deadly after it started April 12, 2022, burning just 6,159 acres in the Ruidoso area and Lincoln National Forest but claiming the lives of two residents.

Griggs, whose district includes portions of the Lincoln National Forest said his bill, pre-filed in the New Mexico Senate for the upcoming 2023 Legislative Session was needed to improve fire safety throughout the state and raise awareness for the most dangerous time of year.

If approved, the bill would add language to state law governing prescribed burns to place a ban on the practice between March 1 and May 31 of any year for private landowners, along with federal, state, local or Indigenous governments.

“The whole purpose is to let folks know the spring is a dangerous time to do it, so let’s just not do it,” Griggs said. “When that wind starts blowing, it has been deadly to people in our state and to the land.”

He said the bill wasn’t just in response to the historic blazes in 2022. Griggs said New Mexico has a history of dangerous, uncontrollable fires in the spring months.

He said the Forest Service was the main entity conducting the fires, but the bill was also intended to address fires set by other agencies and landowners.

“We can’t stand by and count on them to take of business. They’ve proven they can’t,” Griggs said of those conducting prescribed burns. “We can’t do prescribed burning in the spring.

“The winds are worse in the spring, yet that’s when they choose to do burns. It’s proven to be problematic.”

More:Wildfires in southeast New Mexico contained after being lit by lightning strikes 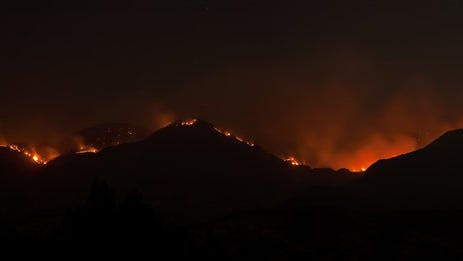 Drought conditions are also usually dire in spring throughout New Mexico, records show, when temperatures begin to heat up after minimal precipitation in the winter which follows the monsoon typically in summer and fall.

Those heavy summer rains can cause vegetation to grow and then dry out, providing fuel for fires.

As spring 2022 developed, New Mexico’s conditions did get dryer, according to the U.S. Drought Monitor.

The Monitor’s report from March 1, 2022, showed about 3 percent of the state was in the “exceptional drought” status – the highest class of drought characterized by widespread water shortages leading to emergencies.

Exceptional drought continued to grow in the months after that, peaking at about 58 percent on June 28, records show, and then declining steadily for the rest of the year.

“It has a lot to do with the fuel build up over the past several years. That coupled with the drought and this unusual weather pattern. There’s a ton of fuel,” Gatewood said.

He said heavy rains during the summer monsoon are often followed by a perilous fire season the following spring, when high winds can quickly stoke a blaze and send it out of control.

“It’s extremely dry, we have a lot of winds. We have winds that last a longer time,” Gatewood said. “Coupled with the fact that we had a lot of moisture last year. Those factors set the stage for a lot of fire growth this year.”

In response to the fires in New Mexico and nationwide, the U.S. Forest Service last year placed a 90-day moratorium on prescribed burning from May 20 to September 2022, conducting a national review in the interim to devise better management practices.

Forest Service Chief Randy Moore said that while prescribed burns play a key role in reducing overgrown vegetation that can fuel fires, the practice must be conducted in consideration of worsening aridification across the U.S.

“Prescribed fire plays a vital role in creating healthy, resilient landscapes and reducing the risk of catastrophic fire to the American people and the lands entrusted to our care. We must work together to reduce the risks of catastrophic wildfire and confront the wildfire crisis across the country,” Moore said in a statement.

To Griggs, his bill halting the fires in spring months was a way to protect the people of New Mexico from the devastation fires brought to the state last year.

“Lots of people lost their homes. It’s been tragic for folks in New Mexico,” he said. “We just have to do better.”