HOBBS – The Hobbs softball team had a chance to win the District 4-5A championship Thursday night, but came up short, falling 6-5 in extra innings in the first game of its doubleheader at Veterans Memorial Complex. In the nightcap, the Lady Eagles were routed 11-0.

“These are the two best teams,” Hobbs skipper Dean Crossland said. “We have gone toe to toe the last several years. It is always a tough game.”

“Dean (Crossland) always gives us a good game,” Carlsbad coach John Tigert said. “We beat them over at our place, but we knew coming over here it would be hard and they would battle us. That is the way a championship game is supposed to be played.”

In the opener, Hobbs had a 5-1 lead, but Carlsbad scored four runs to tie the game in the top of the sixth and then benefited from the extra-innings rule of placing a runner on second at the beginning of the inning to beat the Lady Eagles 6-5 in eight innings. 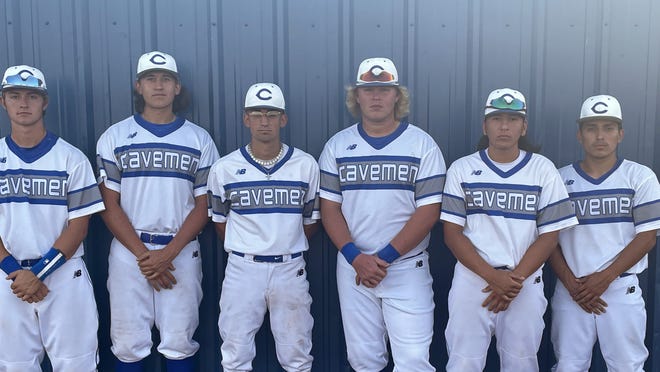 “We were ahead for a little bit and I made a bad pitch call and she hit it out,” Crossland said. “We were one pitch away and we just couldn’t convert. We had pressure on them practically every inning. The girls did everything we asked the to do all week long and gave everything they had. It was a great job from them.”

“I am proud of my girls because they came back,” Tigert said. “Hobbs hit the ball a lot better than the first time we played them. We are a very, very young team and Hobbs is a young team too, so it was a learning experience.”

Carlsbad scored first, getting a run in the top of the first inning. The Cavegirls had a chance for more, but Hobbs starting pitcher Kynsie Bennett was able to work out of a two on, one out jam with a strikeout and groundout.

The Lady Eagles got on the board and took the lead in the bottom of the third.

With two out, Karissa Young singles and more to second on Kamryn Harrison’s single. Kamryn Cantu then walked to load the bases. Kari Garcia followed with a single to right-center, allowing Young and Harrison to score. Garcia tried to stretch it into a double and was thrown out just as Cantu cross the plate, negating the run, but leaving Hobbs with a 2-1 lead after three.

More:Cavegirls sweep Hobbs on diamond, Tigert gets win No. 600 at CHS

Young reached on a fielder’s choice and moved to second on Harrison’s free pass. Young then stole third, putting runners on the corners for Hobbs. Cantu strolled to the plate and crushed the Cavegirl hurler’s offering over the centerfield fence for a three-run homer and a 5-1 Hobbs lead after five.

“That was a big one at the time,” Crossland said. “It was 2-1 and we needed some space. She has been a clutch hitter ever since she has been here as an eighth grader. It was not a surprise.”

In the top of the sixth, Carlsbad started its rally back. With one out the Cavegirls got a single and a home run from Mariah Torres, cutting Hobbs’ lead to 5-3. Haiven Schoolcraft followed with a solo shot, leaving the Lady Eagles with a 5-4 lead. After a walk, Bennett got a fly out to center field for the second out.

Carlsbad’s seventh batter of the inning, Faith Aragon, reached on an error by Hobbs’ first baseman to keep the inning alive. The next Cavegirl hitter, Hannah Martinez, singled to drive in the tying run.

“The line drive that was hit faster than the speed of light,” Crossland said. “That was a tough play for anybody. That ball was hit hard and it happens. It was a physical one. The physical ones are ones we can’t do anything about. It is the mental ones that worry about and we didn’t have any of those.”

Carlsbad scored the go-ahead, and winning, run in the top of the eighth.

The Cavegirls got an RBI-double from Madison Loera before the next two batters hit a pair of fly outs, one of which doubled up Loera to end the inning. But, it was too late, the damage was done.

“It comes down to a walk, an error, and a base hit and the game is over,” Tigert said. “I thought when we got to the international tie-breaker, we would have a better chance of winning because I had the top of my lineup coming up and that helps and it worked out alright for us.”

Hobbs got two runners on in the bottom of the sixth and seventh, putting runners on third base both innings, but couldn’t score. In the eighth, the Lady Eagles started with a runner on second and got the runner to third, but again left her stranded, ending the game on a pop out and a ground out.

Cantu went 3-for-3 to lead the Lady Eagle hitters. She had a walk, two doubles, and a homer with three RBI and a run scored. Garcia was the only other Lady Eagle with multiple hits, going 2-for-4 with a single and two RBI. Harrison walked once and singled while scoring twice. Young also walked once and singled while scoring twice and stealing a base.

Grace Aragon and Johnna Aragon were both 2-for-4 for the Cavegirls. Grace Aragon had a double and a run batted in while Johnna Aragon scored a run. Torres had one hit, a two-run homer while Schoolcraft’s lone hit was a solo blast. Aislenn Whitzel was 1-for-2 with two walks, and two runs scored.

Bennett allowed six runs, five earned, over eight innings of work and got the loss. She struck out one while walking four and allowing nine hits.

Schoolcraft got the win for Carlsbad. The Cavegirl hurler pitched all eight innings, allowing five runs on 10 hits and four walks while striking out six.

The second game was a blow out with Carlsbad cruising to an 11-0 win in six innings.

Hobbs had just two hits in the second game, both coming off the bat of Ayana Rodriguez. The Lady Eagles struck out 11 times and had one walk.

Carlsbad scored one in the first before blowing the game open with seven in the fourth. The Cavegirls then closed it out with three in the sixth.

Carlsbad had 14 hits in the second game. Grace Aragon and Brooke Renter led the way going 3-for-3 while Jessica Munro and Madison Flaco were both 2-for-4.

Faith Aragon was in the circle and got the win for Carlsbad.

Softball state seedings will be released on Saturday evening.