The cause of an early morning fire Monday at a Carlsbad apartment complex was undetermined and under investigation, according to the City of Carlsbad.

The fire was contained to a single apartment, which consisted of eight residential units at the Vista Del Rio Apartment Complex, located at 1300 North Pate Street. The fire was reported at 5:30 a.m., read a City of Carlsbad news release and dispatch logs from the Regional Emergency Dispatch Authority (REDA) in Artesia.

There were no deaths and no major injuries were reported. Some residents did complain of smoke inhalation, the news release indicated.

Some nearby apartment buildings were temporarily evacuated as a precaution, according to the release.

Carlsbad Fire Chief Rick Lopez said a cause of the fire might be released sometime Monday.

REDA logs said units from Artesia, Atoka, Cottonwood and Riverside were called out as well between 6 and 7 a.m.

The City of Carlsbad news release said the Carlsbad Police Department assisted with traffic control at the scene.

“Everything from temporary housing to clothing, food and household items,” he said.

“This is what is great about Carlsbad. We are a big family. When we see people hurting, we come together and help.”

The Eddy County Office of Emergency Management is also coordinating a relief effort with the Red Cross.

The Carlsbad Fire Department responded to multiple other fires over the weekend, Lopez said. He urged residents to be extremely cautious, as an ongoing drought and high winds result in an extreme fire danger.

The U.S. National Weather Service (NWS) in Midland, Texas forecasted wind gusts of up to 35 mph from the north for Carlsbad Monday and rain chances from 20 to 40 percent are forecasted from Tuesday to Thursday. 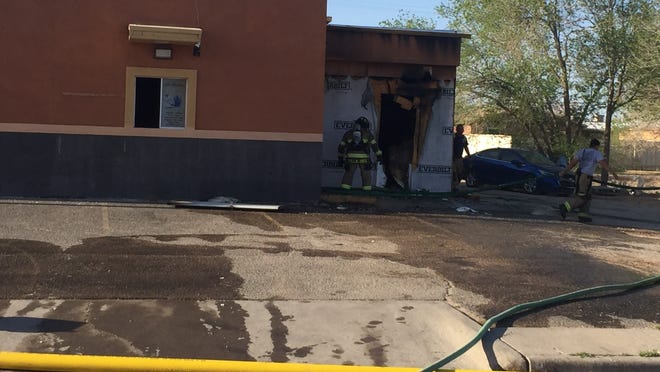