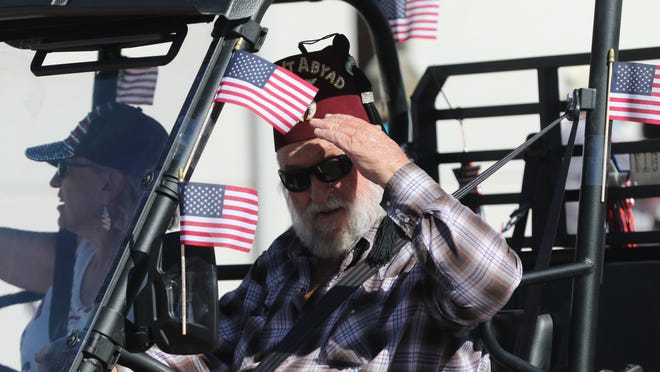 Joanna Sieberg spoke of her father and one of the worst travesties of American War.

Sieberg’s father Charlie James was one of thousands of troops captured by the Japanese during World War II, after the fall of Bataan.

Following their capture, soldiers from the U.S. and Philippines were forced to march 65 miles to prison camps under harsh conditions and sweltering heat.

It was estimated 10,000 Filipino soldiers died during the march and 650 Americans.

The event became to be known as the Bataan Death March.

Sieberg told the story before an audience gathered at the Carlsbad Veterans Memorial Park Monday as part of the city’s Memorial Day events.

“Today is a day of reverence for those who died in our Military,” she said. “I mention my dad because he was one of the fortunate ones who was able to come home. Yes, he did get to come home from the war, but he brought with him a sadness for those who didn’t.”

The ceremony followed a parade through downtown Carlsbad along Canyon Street.

Carlsbad Mayor Dale Janway said the festivities were intended to honor those who made the ultimate sacrifice in defense of the U.S.

“Our ceremony is to honor those who did not make it home,” Janway said. “Today, we honor the many in our military community.”