The Carlsbad Cavemen and Cavegirls wrestling teams completed their district tournaments last week. Nine wrestlers qualified for the state tournament this Saturday in Rio Rancho and look to show the results of their hard work throughout the COVID-19 pandemic.

Seven Cavemen won their district titles in Roswell last week and one Caveman and Cavegirl both finished second in their respective divisions and did enough throughout the season to earn a wild-card addition. 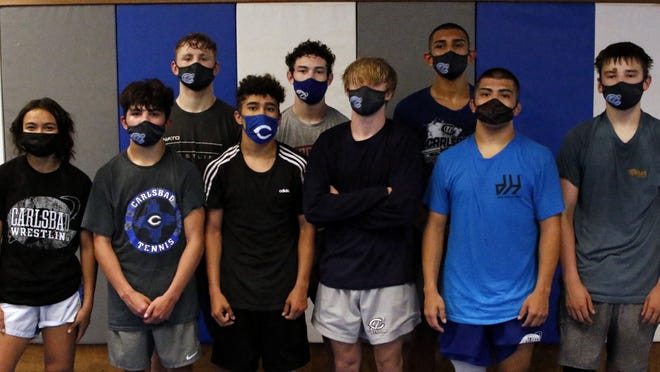 Here’s who qualified and their previous experience, if any, competing for Blue at state.

Rubio finished second in the District 2 girls’ tournament. She recorded a decision win against Highland’s Patricia Garcia in the semifinals before falling to Las Cruces’ Alyssa Desillo via pinfall in the first period of the championship round.

The freshman is 5-4 and will make her second trip to the state tournament. She did not place in last year’s tournament. Rubio will face West Mesa junior Arianna Morales (8-1) to start out the tournament.

The sophomore member of the two Najera boys will return to the state tournament for his third consecutive season. Najera finished the regular season, 10-1 and defeated Hobbs’ Manny Slate via pinfall at the 2:41 mark at district. Last year at state Najera finished in fifth place in the same weight division.

Najera was given the No. 5 seed. His first opponent at state is Las Cruces freshman Nathan Silva (5-3).

Rodriguez defeated Hobbs’ Jordan Palacious via fall at 1:02 at the district tournament. This will be his first time at the state tournament. He currently has a 6-3 record and is unseeded. The eighth grader will face West Mesa senior Savino Delossantos (10-2) in the first round in Rio Rancho.

Defeated Hobbs’ Jordan McClellan via pinfall at 0:44 to qualify for state. Last year Dunn wrestled at state but did not place. Dunn is currently 5-3 on the season and was unseeded for state. His first opponent will be Rio Rancho junior Andres Jiron (16-3).

Defeated Roswell’s Jerry Romero via pinfall at 1:08 at district to improve to 12-1. Wrestled at 120 pounds last year and finished in sixth place at state. As a freshman Romero wrestled in the 132-pound division and qualified for state but did not place. Romero will face Eldorado junior Deshawn Geather (6-2).

Waters lost in the district championship round to Hobbs senior Brayden Strickland, who remained undefeated on the season. Waters was a wild-card addition for this year’s state tournament and is currently 6-5. He will face Santa Fe senior Miguel Padilla (1-0) in the first round.

Najera says this year is “Gold or bust” and will start out his tournament with a first-round bye. He will face the winner of the Chance Carrillo (13-3) vs. Angelo Padilla (6-3) match.

Defeated Roswell’s Gustavo Arreola via pinfall at the end of the second period in the district championship. Rogers is currently 12-1. Last year was his first time wrestling at the varsity level. He finished 2nd place in that state tournament in the 182-pound division.

More:Carlsbad’s TJ Rogers signs with University of Jamestown for wrestling

Rogers has a top seed and a first round bye in the tournament. He will face the winner of the Martell More (8-2) vs. Ryan Cronrath (10-2) match.

Fuentes stayed undefeated in the district tournament at 11-0. He recorded a first period pinfall victory over Hobbs’ Cutter Cruz to claim the district title. Last year Fuentes came in 3rd place in the 170-pound division at state.

Fuentes has atop seed in his division and earns a first-round bye. The junior will face the winner of Joshua Perry (17-2) vs. Matt Franco (10-3) in the second round.