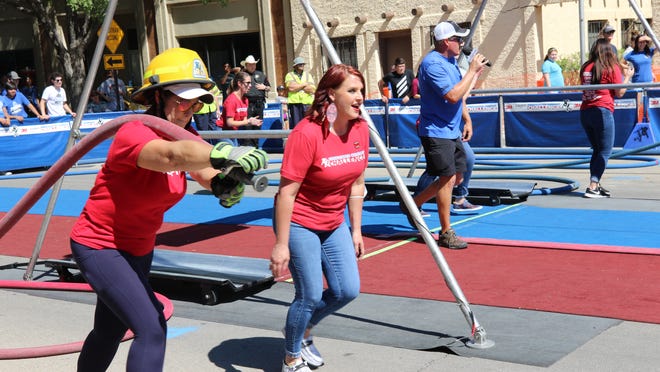 Firefighters from across New Mexico dashed upstairs, sprayed their hoses and dragged dummies.

They were competing in Carlsbad’s annual Firefighter Combat Challenge held Friday and Saturday on Canyon Street in downtown Carlsbad.

The event saw fire departments and other agencies compete in a series of obstacles intended to simulate real, on-the-job challenges firefighters face when saving lives and battling blazes.

And its all done in full gear, weighing up to 75 pounds.

First, they must run up a tower, then pull a weight to the top via rope. After returning to the ground, competitors run through a series of obstacles before spraying a water hose onto a target and dragging a heavy dummy across the finish line.

They are timed in each run, seeking the championship and bragging rights.

This year’s event was hosted by Carlsbad MainStreet, the first in the downtown area, featuring food vendors, a beer garden and other activities for patrons. It also featured a kids challenge for local children.

After the Carlsbad event, the competition heads to Irving, Texas Oct. 7 through Oct. 9, and then on to the Mississippi State Fair in Jackson, Mississippi.

“The mission of the Firefighter Combat Challenge is to promote and showcase the talents, skills and athleticism of America’s firefighter heroes and heroines in an exciting and entertaining sports competition that travels the United States simulating the essential skills of firefighting,” read a mission statement posted on the competition’s website.