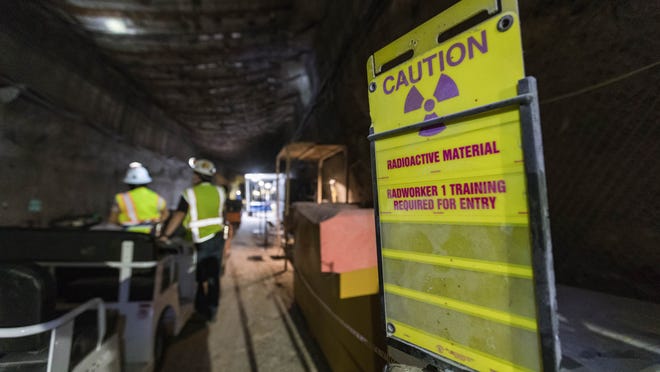 It will cost $100 million to move nuclear waste from around the country to a repository near Carlsbad for the next five years, per a contract recently signed by the U.S. Department of Energy.

The waste will go to the Waste Isolation Pilot Plant, which permanently disposes of transuranic (TRU) nuclear waste in a salt deposit about 2,000 feet underground.

TRU waste is mostly made up of clothing items and equipment irradiated during nuclear operations at DOE sites and national laboratories around the U.S.

It is transported via trucks from the sites around the country and emplaced in WIPP’s salt deposit where the drums of waste are entombed in collapsing salt.

The contract to do so was awarded to CAST Specialty Transportation, per a Thursday announcement, which held the contract previously that expired in May.

WIPP spokesman Bobby St. John said the company has worked with the WIPP project since 1995, and operated without any significant problems or events.

A request for proposal was issued by the DOE on June 10, 2021, and the DOE reported it received bids from four companies.

CAST will operate a transportation terminal within a 10-mile radius of the WIPP site, which is located about 26 miles east of Carlsbad, where waste shipments will be inspected before continuing to the facility.

It will support the DOE’s National Transuranic Program out of its Carlsbad Field Office and will include services to carry contact handled (CH) waste, which is lower in radiation, and remote handled (RH) waste of higher radioactivity.

Other mixed hazardous wastes from DOE sites can also be transported including polychlorinated biphenyls and asbestos.

That was the latest of five contracts CAST held for WIPP transportation since 2000, and DOE previously used two firms to transport waste: CAST and Visionary Solutions LLC.

The 2017 contract was the first time WIPP shifted to using just CAST for its transportation needs.

The contract included firm-fixed-price task orders, per the release, and an indefinite delivery/indefinite quantity contract that allows the DOE to specify tasks required, their budget and timeline.

In return, the selected company would receive an annual fee, and would be reimbursed for permitting costs, New Mexico gross receipts taxes, fuel and a safe-driving bonus.

It was expected that the company would need to plan for about 1 to 2 million miles of travel per year, with WIPP carrier miles ranging over the past decade from 3 million to 300,000 miles annually, records show.

For RH waste, the DOE uses the RH-72B container, which has a maximum payload weight of 8,000 pounds, and includes a lead liner to further protect the waste from fire or other dangers.

Since the WIPP facility opened and began accepting waste in 1999, records show it received 13,106 shipments traveling about 15.7 million miles.

The largest share of those miles came from Idaho National Laboratory at about 9.3 million miles, which also sent the most shipments at 6,667.

The second-biggest shipper in WIPP’s history was Rocky Flats Environmental Technology Site which sent 2,045 shipments on about 1.4 million miles.

The Savannah River Site in South Carolina was third in shipments with 1,692 shipments traveling 2.5 million miles.