John Martorana could not believe what happened as he saw the famed New York City landmarks crumble to the ground during the terrorist attack.

Martorana, a captain for the Fire Department of New York Ladder Company 118, was off duty Sept. 11.

The members of the ladder company who worked on Sept. 11, 2001 were all killed in the line of duty responding to the incident.

“I wound up being in a fog for a little bit dealing with the whole thing,” he said.

As the 20th anniversary approached, the now retired Martorana is in Artesia through Monday as part of the Tunnel to Towers 9/11 Never Forget Mobile Exhibit at the Bulldog Bowl parking lot.

“I spent 19 years on the fire department after 9/11 and being in the firehouse everyday it’s still a constant reminder. It’s still fresh,” he said.

“I think a lot of the people on the outside, a lot of people that weren’t directly affected by it they sort of let it go by the wayside and maybe in their back of their minds.”

Martorana spent Friday afternoon explaining to Artesia and Eddy County residents what happened on that day in New York City.

The exhibit is traveling across the United States,  Artesia the only stop in New Mexico.

“We’re extremely fortunate that Artesia is the only place in New Mexico that this exhibit will be shown,” he said.

Asbill recalled where he was when the planes flew into the Twin Towers.

“I was working as a superintendent in Carlsbad the day this happened and I was actually having a faculty meeting with my high school staff on that morning. It is burned indebtedly in my mind as to what happened that day,” he said.

Aaron Irving, of Oakley and Irving Wealth Management in Carlsbad, was working at the Artesia office Friday when he toured the exhibit.

More:‘That man did it all’: Artesia officer killed in crash remembered as hard worker, family man

“I know a lot of people haven’t had that opportunity and to have it here in Artesia to be able to have that memory and see a little piece of what these people went through and the sacrifices these firefighters and police officers, first responders and normal people made to help their fellow man and a lot of them gave up their lives in order to save lives,” he said.

“It’s awesome to be able to see this and for the Tunnel to Towers Foundation to bring it here and I was glad I was able to see it,” Irving added.

The exhibit is open to the public from 10 a.m. to 4 p.m. at the Bulldog Bowl parking lot in Artesia. 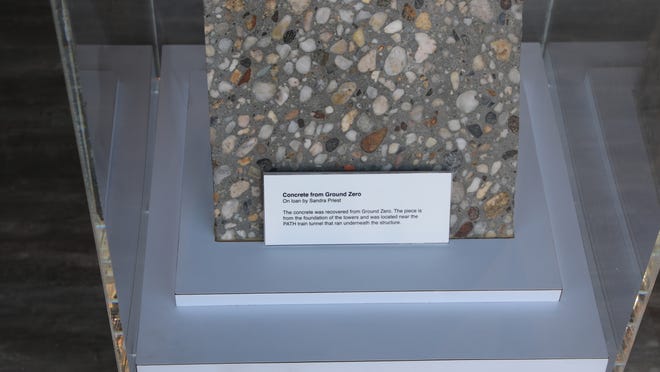