Highways in Eddy, Lincoln and Otero counties are some of the most dangerous in the state for local animals like deer and elk, frequently killed by motorists as they attempt to cross the roads.

Officials worried this problem could get worse amid changes to New Mexico’s climate causing habitats to fragment and forcing animals to traverse road heavy areas of the state, which often means stepping into traffic.

Data from the New Mexico Department of Transportation (NMDOT) showed wildlife crashes were most prevalent along the northern portion of U.S. Highway 285 between Artesia and Carlsbad, along with multiple sections of U.S. 70 in Otero and Lincoln Counties and a stretch of U.S. 82 near Cloudcroft.

U.S. 70 in Bent in Otero County led the state in wildlife crashes, records show, with 17.6 such accidents per mile over the past decade, followed by U.S. 180 near Silver City with about 17 crashes per mile.

U.S. 285 north of Carlsbad was third in the state with 16.5 wildlife crashes per mile, read the report, followed by State Road 516 between Farmington and Aztec and U.S. 550 north of Cuba.

Another portion of U.S. 70 in Ruidoso had the sixth-most accidents per mile, followed by U.S. 82 west of Cloudcroft.

U.S. 82 east of Cloudcroft also made the top 10, along with Interstate 28 between Raton and New Mexico’s border with Colorado and at the Glorieta Pass in the Sangre de Cristos mountains in Santa Fe County.

Deer were the most-hit animal by motorists in all of the NMDOT’s “hotspots” aside from the two in Cloudcroft where Elk were the most frequently involved in accidents.

Black bears were the next-most-hit animal with 650 crashes reported during the same time frame, followed by pronghorn at 221.

Accidents against deer gradually increased throughout the timeline of the survey, from 568 report in 2002 to 991 in 2018.

The number of overall wildlife accidents peaked in 2016 with 1,637 total wildlife crashes, per NMDOT records, costing $20 million in damages.

Michael Robinson with the Center for Biological Diversity, based in Silver City, said the government must plan to protect species from the growing risk.

“It exacerbates the impacts wildlife is already suffering from,” he said of the crashes. “When you have already fragmented habitats, they have to travel further in their ranges and risk going onto roadways.”

In 2019, New Mexico lawmakers sought to address the problem, passing the Wildlife Corridors Act in 2019 which called on the NMDOT to partner with the New Mexico Department of Game and Fish to devise a plan for improvements along the state’s highways that would better protect its wildlife.

Those efforts were funded by the NMDOT’s budget for Fiscal Year 2020 and resulted in a Wildlife Corridor Action plan finalized and released Tuesday.

“Without carefully planned wildlife corridors, New Mexico roads are incredibly dangerous for animals and people alike,” said the bill’s sponsor Sen. Mimi Stewart (D-17) as it passed the New Mexico Senate. “By using overpasses and underpasses, among other tools, we can keep animals off our roads and ensure drivers and their passengers get where they’re going safely.”

Aside from generating data on wildlife crashes to help with road planning, the plan also detailed several construction projects to be undertaken within the hot spot areas.

Multiple projects intended to protect the focal species including deer, elk, pronghorn, bears and others of concern, allowing them to pass through roadways safely within their range. 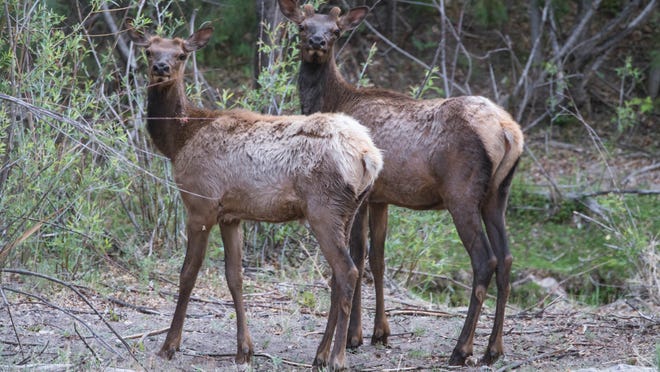 Five of the hot spots were chosen to be prioritized initially, based on the feasibility of the projects, available funding, public support, public land proximity to roadways, and need as determined by the agencies.

Most of the areas chosen for the initial round of projects were in northern New Mexico, per the plan which was to be updated every 10 years.

Stretches of U.S. 70 near Ruidoso and Bent in the Sacramento Mountains made that list, along with U.S. 180 near Silver City, U.S. 550 north of Cuba and 1-25 near Glorieta Pass.

Projects were mostly installing overpasses and underpasses animals could use to cross the roadways, while updating bridges and adding bridges specifically designed for wildlife crossings.

The top 11 projects outlined by the plan ranged in cost from $45 million for such work in the Cuba hotspot to about $17 million for a nine mile stretch of State Road 38 near Questa in Taos County.

This work was needed, read the plan, in response to climate change and subsequent fragmentation of habitats that could lead to animals like deer or pronghorn having to travel greater distances and increasing their chances of encountering motorists.

More:Red-tailed hawk saved by family in Dog Canyon released after rehabilitation in Carlsbad

“Animals need to move across the landscape to access resources. With habitat fragmentation increasing in many areas, climate change will act as an additional stressor on animal movements,” read the report. “The Action Plan focuses on mitigation efforts that maintain current movement corridors, but habitat connectivity will also be key to lessen climate change-driven impacts on species.”

Robinson with the Center for Biological Diversity specifically pointed to a stretch of U.S. 180 between Silver City and Deming, where he said animal crossings were needed to avoid interactions with traffic tied to the local mining industry, and recent projects to widen roads proved an example of development that could further imperil wildlife.

“When we’re planning on widening roadways, we can plan ahead to lessen the impacts of animal mortalities,” he said. “We all have to be on the roadways. This is vital for the wildlife in New Mexico.”