Ranchers in New Mexico were fearful that efforts to restore the iconic lobo in their state could devastate herds of livestock.

U.S. Rep. Yvette Herrell (R-N.M.) said the federal government should pay back ranchers whose livestock is attacked by lobos in southern New Mexico as the U.S. Fish and Wildlife Service planned to introduce more wolves into the wild.

Earlier this year, the agency revised its recovery strategy for the Mexican gray wolf – a species that once numbered in the thousands throughout the American West and was listed as endangered in 1976 – eliminating a population cap of 320 wolves in its experimental population area in southern New Mexico and eastern Arizona.

The U.S. Fish and Wildlife Service also said it planned to increase the number of captive-bread wolves released into the wild through the controversial process of crossbreeding that sees pups introduced to wild dens.

New Mexico’s agriculture industry and its supporters voiced concerns following the announcement that the redoubled efforts could imperil livestock and increase the likelihood of wolf attacks.

Herrell’s bill, which would amend the federal Agriculture Act 2014, would pay for 100 percent of losses, based on market value.

More:Funds on the way for New Mexico’s endangered species through US Senate bill, grants

President of the New Mexico Farm and Livestock Bureau Craig Ogden said this was necessary to fairly address the impacts of restoring the predator’s numbers.

“The presence of Mexican wolves in southwest New Mexico is not without consequence,” Ogden said in a statement. “It is time we fully recognize the broad-based impacts wolves have on the customs and culture of ranching and agriculture in our state and stand by the ranchers who have taken on the additional burden of mitigating wolf interactions.”

Existing relief programs, Herrell said, “unfairly” only reimburse 75 percent of the losses, and do not effectively create long-term protections for those raising livestock on land known as habitat of the lobos.

More:Native flower extinct in New Mexico could be brought back through federal protections

The bill would also establish an “emergency relief program,” drawing continued federal funding to support herds impacted by the wolves in the future.

“Every week I hear from constituents who are suffering from livestock depredations by Mexican wolves,” she said. “The wolves have a devastating impact on farms and ranches in New Mexico and the federal government has a duty to compensate them.

“This legislation will create a more easily accessible and steady stream of compensation for New Mexico ranchers, and I look forward to working across the aisle to move this bill forward.” 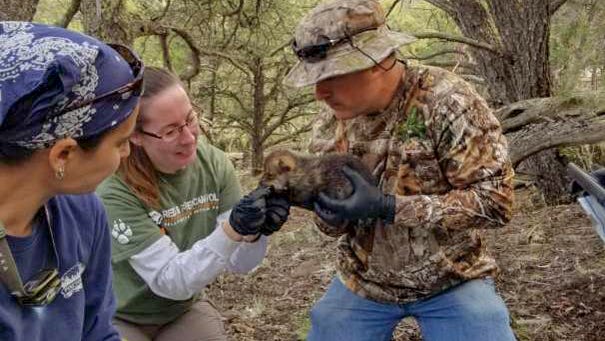 Joining the effort was U.S. Rep. Tom O’Halleran (D-Ariz.) who said the legislation would aim to strike a balance between federal conservation efforts and local industry.

“My bill makes sensible improvements to the predator support process to promote the recovery of the endangered Mexican Gray Wolf species and ensure livestock producers are fully compensated for the losses they incur as a result,” he said.

But national conservation groups said recovering the wolf, and the environmental protections brought with such efforts, should be prioritized over the profits of the agriculture industry.

A lawsuit filed earlier this month by multiple groups including the Center for Biological Diversity and Defenders of Wildlife against the Fish and Wildlife Service sought to rescind the new rules so they could be revised to address the plaintiff’s concerns.

The suit alleged the new rule were “unlawful” as they did not adequately allow for the lobo’s range to expand past a northern border of the population zone, confined to southern portions of New Mexico and Arizona.

Research showed, per the suit, that the wolf would best survive in a “metapopulation” made up of three separate, but interconnected populations.

The single population area being used impeded genetic diversity, the suit read, leaving surviving wolves more susceptible to threats in the wild and less likely to grow and breed.

“As a result, the population has struggled. While the wild population has grown since reintroduction began in 1998, it is far from secure,” read the suit. “The population remains isolated and extremely genetically depressed: on average, any two wolves are about as closely related to each other as full siblings.”

This alleged denial of the need for expanding the wolf’s population and range was due to “political pressure,” the suit read, from the livestock industry.

“The Service has repeatedly declined to follow the best scientific guidance to achieve long-term Mexican wolf recovery in deference to political pressure from state wildlife officials and the livestock industry—including most recently in the challenged revised rule,” read the suit.

Michael Robinson with the Center for Biological Diversity said the federal government was favoring the livestock industry over the environmental needs of the region and should focus on genetic diversity to truly advance the species’ recovery.

“Underlying the federal absence of genetic standards is a determination to keep killing wolves and avoid effective wolf releases, all on behalf of the public lands livestock industry,” he said.