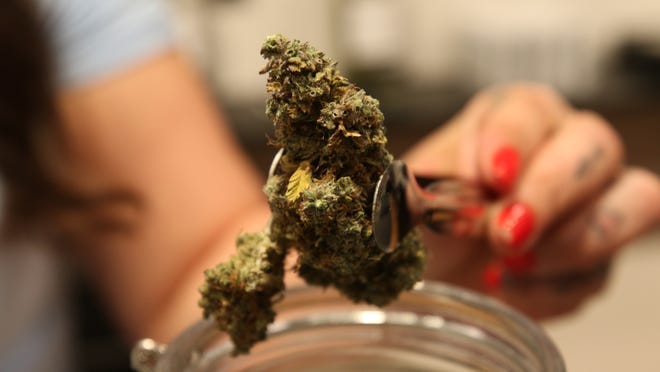 Ron Head hadn’t used cannabis for decades before opening his own dispensary in downtown Carlsbad.

For upwards of 30 years, he worked as a federal employee, rising to the chief financial officer for Nuclear Waste Partnership, the contractor hired by the U.S. Department of Energy to operate the Waste Isolation Pilot Plant nuclear waste repository near Carlsbad.

Retirement brought an end to routine drug tests though, and Head said he resumed cannabis use to relax.

Today, his relaxed nature is far from what one would expect of a head officer of a nuclear waste repository.

He wears shorts and a T-shirt to work, eager to joke and laugh about his unlikely path to becoming a purveyor of cannabis products and continually displaying a vast knowledge of the industry and its inner workings.

“I’m a guy from the 70s. In college, I had little bit of that,” he said of past cannabis use. “Working with the federal government, I hadn’t used in 30 years. After I retired, I got into some recreational use.”

Head and friend Don George, who also worked for years on the regulatory side of the WIPP project, found they were easily able to use their backgrounds to navigate the complicated path toward state certification for recreational sale of cannabis that took effect in April.

They were ultimately issued the first such license in Carlsbad and recently opened Pecos Oasis in the city’s downtown area on Canyon Street.

That location was important, George said, to give the business a high visibility in the community its owners called home for most of their lives.

“We wanted to be downtown,” George said. “We want to be a part of Carlsbad.”

After setting up shop, Pecos Oasis needed a provider of the product itself. It settled on Carlsbad-based grower Process Management Control – a former water infrastructure company that previously supplied treated water for the dairy industry.

During the COVID-19 pandemic, demand for dairy products declined and the company’s business needed to diversify.

That’s when it began supplying water to cannabis growers in the Las Cruces area, and soon decided to take on the complex task of growing the plant for itself.

Kelly Laird, co-owner of Process Management Control, herself a life-long cannabis user and graduate of Carlsbad High School, said the company received the State of New Mexico’s fourth grow license for recreational cannabis and is now on its fourth harvest.

Each harvest uses eight grow rooms that produce about 12 to 15 pounds of the cannabis. Laird said she hopes to increase that output to 20 pounds a room, or 160 pounds per harvest.

More:Artesia approves special use permit for first cannabis dispensary in the community

Pecos Oasis offers flower strains like Purple Kush and Bruce Banner, bagged or pre-rolled, and edible products like gummies along with topical salves.

The store also stocks vaporizer cartridges and a bevy of colorful glass pipes.

About 80 percent of sales are for recreational use, and 20 percent are medical.

The business prides itself on its diverse inventory and in hosting a professional, relaxed atmosphere for a diverse clientele, Head said.

He said staff are always willing to help educate new customers – many who might have never considered cannabis use until it was legalized less than three months ago.

“We wanted everyone to feel comfortable,” Head said. “It’s different in different parts of the state. There’s still some stigma.”

More:New to cannabis culture? Here are some terms to know to help navigate world of weed

Cannabis sales up millions since legalization

Process Management Control hopes to expand its operations beyond Carlsbad, offering up its locally grown product to dispensaries throughout southeast New Mexico in cities like Hobbs, Cloudcroft or Ruidoso.

“This wasn’t anything we thought we’d be doing,” Laird said. “We had to diversify our company, and this is where we came out. It’s something new.”

The region benefits from an interstate “cannabis tourism” industry, as users from neighboring Texas – a highly conservative state Laird said was unlikely to legalize recreational use soon – frequently travel across the border to New Mexico, many for work in the oilfields, where they can light up without legal worries.

She said business is good and cannabis is quickly growing in popularity after the State of New Mexico legalized its use for all adults in the state older than 21.

In June, cannabis sales throughout the state were about $38 million, per the latest records from the State Cannabis Division – the newly-created agency of New Mexico’s Regulation and Licensing Department.

More than half of that, 55 percent, was from recreational sales.

Albuquerque led the state in total sales at about $13.7 million, followed by Santa Fe at $3.3 million and Las Cruces at about $3.1 million.

Carlsbad was seventh in the state in cannabis sales at about $1.1 million. That revenue was similar to revenue reported for other small cities in the conservative southeast region of New Mexico.

But Laird said once the stigma of cannabis use is removed, myriad medicinal and personal advantages are revealed.

She and Pecos Oasis’ owners agreed that the Carlsbad community will soon become educated and more accepting of cannabis and the new industry will flourish in the Cavern City.

“For the longest time, we didn’t tell our family and friends what we were doing. We didn’t know how they would react,” Laird said. “When people see our facility, it reinforces that we’re doing it correctly.

“Once you get the stigma off it, there are so many benefits.”