Southeast New Mexico College in Carlsbad, New Mexico, which transitioned out of the New Mexico State University system to become an independent community college, installed Dr. Andrew Nwanne as interim president in February as it searched for its new president.

Nwanne is among six final candidate for the position, which include administrators from New Mexico Junior College in Hobbs and San Juan College in Farmington.

Larry Sanderson, vice president of institutional research and accreditation at New Mexico Junior College in Hobbs and Lorenzo Reyes Jr, associate vice president of Workforce, Economic, and Resource Development at San Juan College in Farmington are the only other New Mexicans to make the list.

Vice President of Student Affairs at Owensboro Community and Technical College Kevin Beardmore is also a finalist. Owensboro is located in Kentucky.

The college announced public forums scheduled for Sept. 26, Sept. 27 and Sept. 28 in which the community can learn more about the final candidates.

The Board of Trustees of SENMC is expected to announce its decision at a public meeting scheduled for 6 p.m. Oct. 17 at the college.

Reyes was named director of workforce development at San Juan College in 2016, having been previously employed at New Mexico State University in Las Cruces, according to his LinkedIn account.

He became a vice president at the college in 2021, and his time there saw the opening of the Farmington Workforce Connections Center on the college’s campus in 2022 and the establishment of the Big Idea Makerspace in 2022, a collaborative space for entrepreneurs and creators in the Farmington community.

According to Sanderson’s LinkedIn profile, he became vice president for development at the Hobbs college in 2008, advancing to Institution Research and Accreditation Vice President in 2021. Prior to that he was employed by Capella University, an online education institution, and was director of community affairs at the University of New Mexico.

Both men have led in colleges serving communities similar to Carlsbad, where technical and vocational education are in high demand among an economy focused on oil and gas, mining and manufacturing.

A 2018 article by the Panola Watchman cites Adam’s prior 20-year career in the natural gas industry. Panola College is known for its professional and technical education programs and like SENMC boasts a nursing program.

Cecil-Sanchez’s LinkedIn profile boasts a 20 years career at community colleges, including administration of Lone star College-Tomball and Lone Star College-University Park. Cecil-Sanchez is the only woman in the field of six candidates, Cecil-Sanchez was also a finalist in 2021 for the president position at Northeast Junior College in Colorado, but was not ultimately selected.

Cecil-Sanchez has a doctorate in higher education administration from Texas A&M University and taught English, technical communication and literature and served as the English department chair at Lone Star College before taking a vice presidents role in 2015.

Owensboro offers students degree pathways for career and workforce development, according to its website.

More information on the candidates is expected to be released by SENMC this week. 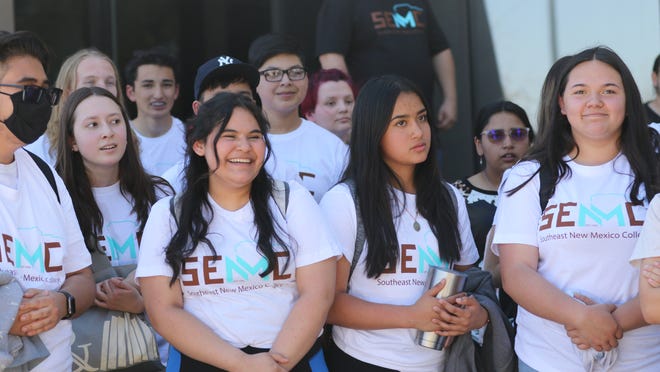 Selection of president is a critical step for the college which has been transitioning under the direction of its Board of Trustees and Nwanne for several months.

Nwanne was first named interim president in 2020 when the college was still a branch of New Mexico State University following the departure of Dr.

The college’s independence was codified into New Mexico state law during last year’s legislative session in Santa Fe, with the passage of House Bill 212, sponsored by local lawmakers Reps. Cathrynn Brown (R-55) of Carlsbad and Jim Townsend (R-54) of Artesia.

The bill passed the House 62 to 7, and the Senate unanimously and it was signed by Gov. Michelle Lujan Grisham following the session.

Among the recent transition changes were the selection of a college mascot – a mountain lion that students dubbed Eddy.

The college also saw the placement of branded signs at the college to replace those that once announced the complex as a branch of NMSU after its official renaming in April. A website with the college’s new name and logo was launch earlier this year as well.

It is expected that the college will seek approval of a several million dollar general obligation bond in the November general election which officials said would be used for the construction of a technical and vocational facility, a project to be overseen by the new president.